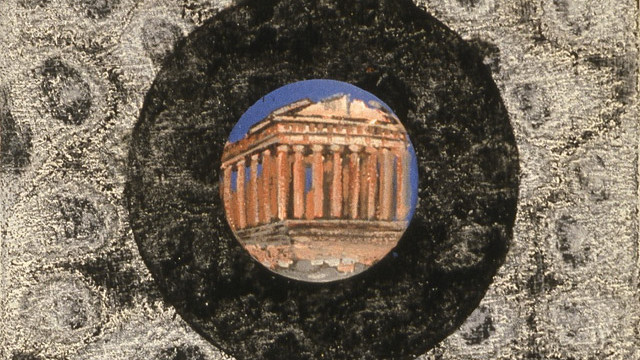 In each of her miniature pairings of architectural images, Mila Dau juxtaposes a surviving structure from the Classical world and a 20th-century museum of modern or contemporary art. With an artist’s eye (although it is also obvious that Dau knows her architectural history), she discovers formal similarities between old and new. These range from the evident (I.M. Pei’s glass pyramid at the Louvre and the Pyramid of Cestius in Rome) to the audacious (the Guggenheim and the Colosseum) to the subtly mocking (Philip Johnson’s blocky Kunsthalle in Bielefeld and the Athenian Treasury). If nothing else, these tiny tondos – painted on buttons – are proof of how much contemporary architects owe to ancient Greece and Rome. But Dau’s scenes, evoked with a sensual touch very unlike the cramped precision of most miniatures, are much more than history lessons.

At the end of the 18th century, a German writer insisted that “Picture Halls … ought to be temples.” Our contemporary version of W.H. Wackenroder’s wish is the cliché, “museums are the cathedrals of today.” Dau permits us to consider other analogies, to wonder what contemporary museums might have to do with tombs, palaces, arenas, markets and treasuries. She also opens the way to broader speculation as we try to picture these museums when they will be as old as the antiquities they are paired with. If some architectural tourist of the future were to visit a Hans Hollein or Richard Meier design that had been emptied of its art and subjected to the ravages of time, would they find ruins as picturesque as those of Athens and Rome?

Dau’s lovingly painted vignettes, in which light seems to have been spread like butter, also permit us to imagine an exchange of functions between paired buildings. Suppose the High Museum in Atlanta were transformed into a Temple of Venus, and the museum’s collection reinstalled in Baalbek. Imagine the Guggenheim’s Kandinskys hanging on the crumbling walls of the Colosseum, while Frank Lloyd Wright’s structure was given over to gladiatorial spectacles.

And if one is not in the mood for such trans-epochal speculations, the voyeur of architecture can simply see these keyhole/porthole images as the invitations to voyage which they are.