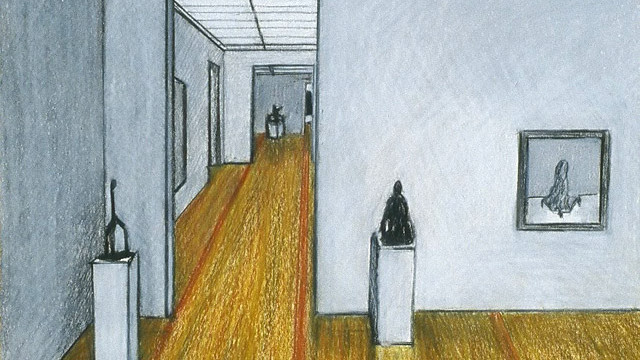 I think of museums as spaces in which questions about ourselves and about life are asked and answered. When I moved to New York, I felt surrounded by great museums and new questions. Thus I began to make museums – the containers of art – the focus or content of my art. I developed this idea of the architectures of art by working on series of projects that were formally different but conceptually related to each other, each new series borrowing and reinterpreting techniques and formats from the previous. As more and more contemporary art museums and exhibition spaces are built all over the world, my interest in these cathedrals of art has continued to grow.

After having depicted the containers of art from the outside for a few years, I began looking inside them in 1998 with the series titled Enfilades. The museum interiors of these three series, have taken on a sense of urgent direction. As the title states, an “enfilade” is an interconnected sequence of rooms opening one into the other. This sequence of rooms, though dating back to the palace architecture of the 17th century, is so common in the museum architecture of the last decades, that I chose it to represent the interior space par excellence of the art museums of today.

In all three series, the directed sequence of rooms, or enfilade, is often accompanied by a movement from darkness to light, or vice-versa. Viewers are not told whether this light is natural or artificial, whether they are being directed towards an open or a closed space. They have no knowledge of where they are actually going. They can follow their desire to head for the luminous source, hoping that perhaps by entering into the next room they will know more about their destination and journey, or stay where they are, wondering about what is over there. It is for the viewer to imagine and the viewer to decide.