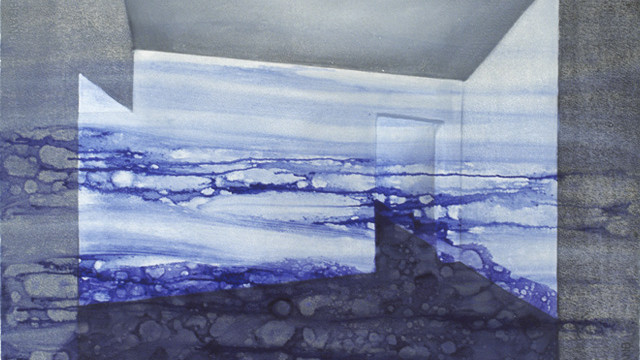 ARCHITECTURE AND ITS DOUBLE

A figure floats up into the blue and towards the skylights, above the heads of the viewers. The image depicts one of the works by Mila Dau in which two systems of signs are superimposed. A liquid layer of rarefied monochromatic color is superimposed onto the architectural structure of a museum. In this case, the female nude that levitates upwards has been added on. The work seems like a synthesis of the themes of Mila Dau’s paintings.

When Mila Dau, a painter of figures, arrived in New York, she took on portraiture with the series titled Face to Face, completed in 2005. Dau set some parameters for the portraits because limits can stimulate the act of painting. First of all, the format had to be the same for all, and then the time: all portraits had to be done in one hour. “I have become a different kind of painter. In that one hour, both the sitter and I were very focused on the experience at hand”. Once the portrait series was finished, Dau reconnected with her architectural background and began working at Architectures (2006-2010), a series of views of the containers of art: museums.

Two collateral series took off from here, Enfilades, a sequence of rooms, as in the image of the Centre Pompidou, and Flooded Halls, rooms flooded with light, as in the Hamburger Bahnhof in Berlin, a symphony in blue.  As we see in Appenzell, colors invade the halls, yellow in Schaulager, green in the Van Abbemuseum. These are the acid colors of Mannerism. On the other hand, Dau is a bit manneristic, since her work is primarily a reflection on art itself.

Mostly built by architectural superstars, museums of contemporary art have indeed changed our landscape. The artist focuses her attention on this very phenomenon: “I found myself noticing how the space around the art complemented and, at times, overpowered it. Some of these spaces were simply stealing the show. This intrigued me”. Thus the container became the content of her work.

In DIA Beacon, soft reds submerge the rigid grey structures. In Kiasma, the red creates a mesh of straight and curved lines. In Centre Pompidou, the diaphanous play of transparencies is complicated by the reflection of the paintings on the floors, as in certain photos by Louise Lawler. The space of the Turbine Hall at the Tate Modern in London is duplicated in its own reflection: the tide of red rising only as far as the horizon line created by the architecture and its double.  For MoMA, the artist uses yellow. She uses blue in another picture – but wait, something new is happening here: the color forms a square that frames the figure. In fact, Dau is beginning to populate the empty spaces of the museums with figures of visitors or guards and of the other people who work there. Thus it is the series titled Visitors and Staff that completes the artist’s analysis of the art system: after the artists and the museum-containers, we are shown the viewers.  The Art Institute of Chicago is inhabited by sculptures, by images painted on canvases, by the figures of dressed visitors and by a female nude. It is, in effect, a kind of anthology of the figure.