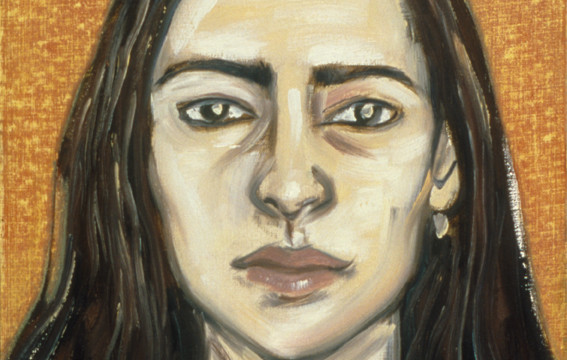 As many visitors will attest, New Yorkers are warm and generous people who are willing to go out of their way to be helpful….if you can get them to stop for a minute. Mila Dau, who moved to the city from Rome in the 1990s, feeling alone and isolated, discovered how true this is when she hit upon a way to get her art world colleagues to pause, if only for an hour. Dau decided to embark on a series entitled Face to Face, and began to reach out to artists working in New York in order to persuade them to allow her to paint their portraits. She did not set out to document a scene; the artists Dau painted had little in common, artistically or physically. The only criterion she set for herself in selecting her subjects was that she had to admire their work and be personally curious about their creative process and career trajectory. Dau came away from the process not only with a series of insightful portraits but also many fascinating stories about the lives and works of her colleagues.

Whether making contact directly or through mutual acquaintances, she found the process both interesting and challenging. Because Dau was new to portrait painting in the United States, she had little to show those artists who expressed interest except her enthusiasm. Even so, most were very open to the idea; even those who declined her offer usually did so graciously. Thus Dau began the Face to Face series in 1999, one portrait at a time, and found that by capturing the likenesses of artists directly from life, she was able to engage with them on a deeper level than the superficial chitchat of gallery openings and, at the same time, learn about the ins and outs of the New York art world.

Dau is not a portrait painter by avocation or study; she is a trained architect and conceptual artist who works in cycles of projects, each with a set beginning and end. In fact, Face to Face, completed in 2005, is a sequel to Oracles, a series of miniaturized views of contemporary art museums paired with monuments from antiquity. Dau considers herself a mannerist, making art about art, so the next logical step was to move from the containers of art to its makers.

She set specific parameters for herself for this project: each portrait was to be painted on a linen support measuring 16 x 14 inches. This size was chosen to snugly fit the sitter’s head in a close-up view and be easily carried on New York’s subway system along with her paints and brushes. Dau set the time limit for each sitting to one hour, in order to accommodate her subjects’ busy schedules, but also because she believed this constraint would allow her to quickly and accurately capture the character of the sitter. Dau says,

“Time is of the essence especially in portraiture, which captures the living person and can only be done when life is still there. With life gone, what is left for the painter to portray? The artist portraits are not only about the people I met in New York. They are also visible evidence that I have acclimatized to the speed that characterizes all forms of communication here. I have become a different kind of painter. In that one hour, both the sitter and I were very focused on the experience at hand. I painted almost automatically, while the sitter sat quietly or conversed. I found listening as important as looking, for the words of the sitter often provided me with insights that helped me portray them.”

Once Dau returned to her studio, she began to work on the backgrounds of the paintings, something she considers as crucial to the project as the actual likenesses. She slowly and painstakingly created a rich and shimmering surface by layering and removing paint, and repeating the process, for months on end, until the figures portrayed found their ground. Each background is of a different color, one that Dau intuitively felt captured the aura of the artist portrayed and still resonated with their presence after the initial one-hour encounter.

The canvases in Dau’s Face to Face series recall those of Romano-Egyptian Fayum mummy portraits. The best-preserved paintings from antiquity, these works dating from the 1st to the 4th century AD were first discovered in the 17th century and are reminders that the urge to capture the essence of a personality in paint is an ancient one. Realistic Greco-Roman portraiture gave way to Byzantine religious icons that symbolically depicted idealized characters until the next precedent for Dau’s portraits appears in Giotto’s fresco cycles. The people who populate these dramas are clearly individuals despite the fact that they are meant to represent supernatural beings or key figures in the Christian story. The great portrait painters of the European tradition such as Bronzino, Titian, Velasquez, Rembrandt, Rosalba Carriera, also inspire Dau’s work, and especially Antonello da Messina, who used reduced means to capture the essence of his subjects. The world’s museums are full of the likenesses of artists, usually captured by painters who were their friends and colleagues, and the Vasari Corridor, connecting Florence’s Palazzo Vecchio and the Palazzo Pitti across the river Arno, houses a large number of self portraits of important artists as well.

The influence of more recent artists such as Chuck Close, Alex Katz, Francis Bacon, Lucien Freud, and even the Roman painter of Communist dignitaries, Renato Guttuso, can also be seen in Dau’s Face to Face series. However, it is Andy Warhol, Alice Neel, and David Hockney who use high contrast, simple colors, and work fast that are Dau’s favorites.  Since the invention of photography, many artists have turned to that medium to document their colleagues. August Sander’s portraits of artists from Weimar Germany and Henri Cartier-Bresson’s photographs of artists and intellectuals from the 1940s come immediately to mind. More recently, Richard Avedon and Timothy Greenfield Sanders have extensively documented their artistic milieus. Dau, however, wants to be the lens, preferring to paint directly from life. For her, a photograph is too much “of the instant,” and believes she can delve deeper into the life and character of her sitters by engaging with them in a more direct way. To capture the essence of a human being is always the first and foremost goal of Dau’s Face to Face series.